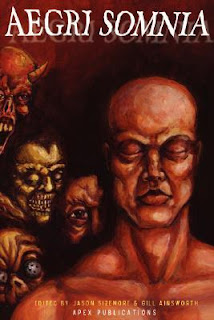 Aegri Somnia is a Latin phrase, one that means, literally, ‘A Sick Man’s Dream.’

Aegri Somnia (for me, at least), was always going to be a winner. The news spread; little banners and bookmarks circulated with an illustration enough whet my fantastique taste-buds. For dark fiction lovers – for I assume you wouldn’t be reading this if you weren’t – the appeal that can often come with holding a little package like Aegri Somnia goes beyond mere words. Whereas some see nothing more than something to perhaps use as a drink coaster on a coffee table (god forbid), aficionado’s perceive a treasure trove; something priceless: imagined worlds evolved from sacrifice and sweat.

Jennifer Pelland is our first executioner of tales with YY, and it’s a worthy opener. Reminiscent of the design on the cover, we know this is a kind of monster territory. Little monsters. Monsters that scurry. After an abortive attempt to fashion a human baby goes horribly wrong, the man for whom the experiment was designed has to repair the damage. Although concerning fiends, the story’s heart is ultimately a cordial domestic one between a small boy and a grieving adult ready to make the ultimate sacrifice to put things right.

Christopher Rowe’s The League of Girls is a little more subdued. The plot seems to fit well into the Aegri Somnia theme, but I was somewhat baffled; maybe this was the point. After coming home from hospital following debilitating injuries from a plane crash (or was it)? Sammi is allocated a place in a girl’s boarding house that may well be some kind of afterlife.

One of my favorite's follows: All Praise to the Dreamer by Nancy Fulda. It’s another story strongly tied with parenthood, and the lengths we go to preserve our brood. What makes this one tick, however, is the strange, sentient creatures preying on humanity’s infants. They are even given a delicious name (one I won’t reveal here), and you can tell the author has fun with her creations. A clever ending ensues.

Mythology comes to the forefront with Nothing of Me by Eugie Foster. Deity’s everybody will be familiar with – those from Homer’s Odyssey, rear up in a present day tropical setting. It’s a cool little story, and a lot of people will enjoy it; however, I’d just finished reading Dan Simmons’s epic  the night before. Hence, was a little put off coming back to Zeus and his immortal family of gods, goddesses and demigods. They seem to be everywhere in fiction, marauding around writers heads and begging them for more tales. Eugie’s one is infused with curses, betrayal, and romance with immortals Scylla and Glaucus at the center of things.

Natural storyteller Scott Nicholson gives us Heal Thyself, probably the ultimate standout. Jeffery Jackson has problems – big problems. And when he sees a past-life hypno-therapist to heal his cerebral sufferings, his psyche dovetails into area’s better left unexplored. I’ve made it no secret in the past (pun intended), I predict Scott’s only a couple of books away from breaking through big-time, and here you'll see why. There is a miniature to Heal Thyself, and (in my opinion), he seems to grasp elusive topics with a fiery, almost effortless imagination.

Perhaps the only story not quite fitting in here is On the Shoulders of Giants by Bryn Sparks. Though only due to the hard science-fiction factor others have shied away from. Apex readers will know Bryn is talented, however – and here he fuses human emotion with robotic sentience.

Dream Takers by Rhonda Eudaly tackles sleep disorders. Those familiar with insomnia (or nightmares) that invade us when we close our eyes will be chilled. In this future, technology has enabled one Timothy Lindsey to snatch nightmares from the subconscious and give them to somebody else. In this case, its inmates on death row . . . monsters already filled by the void. And of course, there is always a price …

The next piece, Letters from the Weirdside by Lavie Tidhar, seems dedicated to all the struggling dark fiction writers out there. We begin with a typical day in a horror magazine editor’s work-place. There follows his decent into story realm, known reality fracturing and the often blurry line between fiction and our own four-dimensional world ripped asunder: a motif Stephen King has explored to great extent.

Every story here seems to feed off the one before, and the next one, Wishbones by Cherie Priest, comes off as good as the rest. The plot concerns ancient mythical secrets during the civil war and is branched into the present involving teenagers working in a pizza store. Cherie’s use of language (especially between the teenagers), is right on the money; banter flies from the page like you’re watching it on the screen. Also, it’s the images evoked during the war camps (as apposed to the supernatural elements) that ultimately win out.

All becomes as Wormwood will certainly make a lot of techno-phobes and environmentalists out there squirm in their respective reading chairs. It’s authored by Angeline Hawkes, who purveys the wasteland of  years after the meltdown and reports what's there. Alex has permission to travel to the abandoned city to add some verisimilitude for a school report and perhaps take a few photographs. Alex discovers (after his motorcycle breaks down), that Chernobyl isn’t quite as deserted as the world argues ... and the city has one last, horrifying gift for the world. Sounds great, and it is … except there is an element of disbelief for the reader as Alex comes to terms with his new environment perhaps too swiftly. Here, we’re thrust forward into B-grade territory as though we’ve been there all along – and you might potentially find yourself frowning. However, it is a short story, and ultimately the author is to be forgiven.

It seems just when you think the best story has shown itself, along comes Mens Rea by Steven Savile. What started out as a seamy cop  tale – perhaps a very gruesome take on TV’s The Bill – abruptly goes ape into dark regions involving experimental brain surgery, hoodlum thugs with telekinetic gifts – and an ending just begging for some kind of universe to be explored. Steven takes to the theme beautifully, imbuing Mens Rea with a vigorous, complex, and ultimately uplifting tale.

It was a good ride. And I was happy to make the journey. All authors are to be commended, as they have been given a task and responded. Bravo Jason Sizemore and Gill Ainsworth for editing. Aegri Somnia is sold through from Apex Publications.