The Haunting of James Hastings by Christopher Ransom 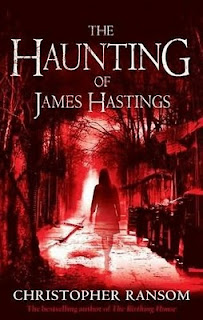 Following up an astonishing debut is never an easy thing. Whether under the guise of music or the auspices of horror literature, proving to the masses lightning can strike more than once can fill the creative heart with dread. It was two years ago now that Christopher Ransom delivered The Birthing House … a kind of wandering homage to the ghost story’s of old – but bristling with new enthusiasm. Though riddled with some of the pitfalls of a first appearance, it still conspired to be a beautiful nativity-fabled gothic deserving of its place on any bookshelf.

Authors like to wear many hats, but it’s apparent that with his sophomore effort, Ransom is setting up shop with the modern ghost story. After a quick perusal, I knew what we have here is more of the same … but this was fine by me. Occasionally writers (like musicians), will stick to a formula. Thereafter it becomes a kind of territory where the imagination can frolic.

James Hastings is a body double for the widely successful hip hop artist Ghost, an obvious literary reverence or echo to the real life Eminem. After the death of his wife Stacey in a small and mysterious accident, James – like his alter ego Ghost – goes on sabbatical to deal with his grief. Soon, his neighbors come into the fray, and after purchasing a telescope, a spying game then ensues. After the death of his immediate neighbor, a new resident moves in. She is young, alone, and bears a striking resemblance to Stacey. A relationship is then forged, and James goes on an odyssey of pain and learning – tempered by the haunting reality of Stacey’s ever too real presence. Not only in his house … but in the eyes of his new neighbor Annette.

As avid readers of dark and speculative fiction (I assume you all are), most of us know the correlation between music and fiction: they feed each other – giving rise as influences so the other exists. And that’s what we have with The Haunting of James Hastings: a striking hybrid of gothic romance novel and a CD boxset choc full of lyrical extras. Like his previous book, it takes the cue from novels like Rebecca and Bag of Bones, but I found at its heart a beautiful illustration of domestic married life and how emotions can be woven into the brick and mortar of houses. As a fan of first person narration only second, Christopher’s voice is so accessible you won’t even know that it is. A decidedly male voice … but one that resonates with this reviewer.

While The Birthing House had a climax seeming to raise more questions than answers, you’ll find the revelations ladled on here to be just as hair-raising and surprising than anything an early M. Night Shyamalan committed to the screen.