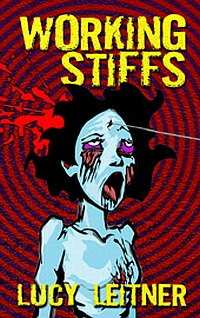 This is the fourth book in a series called Fresh Flesh from Necro Publications. For a reading experiment I began all the titles at once ... and the tale holding my attention for the longest duration would be the one to receive the first appraisal. Lucy Leitner’s Working Stiffs, a comedic take on the zombie sub-genre, stood out among the rest.

One thing neeing to be said: the cover illustration doesn’t quite do Lucy’s work justice. Make no mistake, this is an adult novel. The comedic elements are pertinent – but it still manages to do the same thing George Romeo attempted when he directed his first film: hold up a dark mirror to our society with socially relevant commentary.

Pittsburgh, and the zombie uprising has come to giant corporate entity Pro-Well Pharmaceuticals. Led by the charismatic ex-meth dealer Marshall Owens, Pro-Well has taken the dregs of society off the streets to amass assembly line workers that will not question authority and work with the efficiency of mindless automatons. But soon the plan backfires when the injected serum becomes an unstoppable virus rendering the employees with an appetite for human flesh. Pitted against the horde are an eccentric group of misfits and mavericks: higher echelon employees who will now consider the normal drudgery of a nine-to-five work day the pinnacle of paradise.

Working Stiffs is not the kind of work I would usually seek out – and depending on who you talk to the zombie sub-genre is now becoming a somewhat jaded niche market in danger of becoming over-saturated. But I found the lack of familiarity here to refreshing. Not being an expert on the rules I could casually slip into the story without playing jury or arbitrator to a dark fiction work seething with clever observations and biting sarcasm. The diverse characters here are the crowning achievement, and it was easy to envision each reader who takes the journey finding someone to identify with. There’s Hank, the jaded misanthropic queer who’s addicted to the call of happy hour, an enigma that ‘no one really understood but everybody knew not to fuck with.' There's Janice the anointed Goth who joins Pro-Well to ensure enough job security to save up for her burial plans. In the mix is also a football-obsessed janitor who forges lifelong bonds with local icons he has never met - and an ex-army General who slowly leads the ranks of the dead into an epic showdown with the scarred CEO who started the whole mess ... a chief executive who still dreams of a future enforcing thousands of hobos to work under slave conditions in order to make male pattern baldness a thing of the past.

Relevant and sharp, Lucy Leitner has concocted a humorous but above all engaging allegory of working life – a pleasing romp with enough extravagant metaphors to keep any zombie aficionado entertained. With three books in the Fresh Flesh series to come, I look forward to more high calibre outings from Necro Publications.
Posted by Matthew Tait