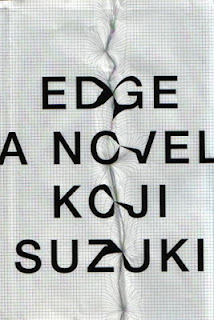 A name now synonymous with dark fiction, Koji Suzuki rose to prominence as the original author of the Ring Cycle books, a sub-set of accomplished outings sparking off not only English translations, but a veritable trove of manga and movie adaptations giving rise to a kind of renaissance in Japanese horror fiction and cinema. Quick to catch fire overseas, this new-found genus soon found an audience across the Pacific with American director Gore Verbinski re-making the original Ringu for English audiences ... an interpretation that to this day remains all enduring with its tone and tension-wrought climax.

It’s an impressive resume, but right off the bat I’m going to inform reader's EDGE is my first introduction to the authors prose – and partly why I decided to take on the book for appraisal. Here, Koji shifts gears in a largely new direction from what we have come to know in his thematic world of J-Horror: poltergeists given a wide birth in favour of terrors more existential in nature ... the fear of nature itself. In the past few decades, science (and in particular fields of study such as quantum mechanics), have offered us a glimpse of an unseen world lying just under the surface of our perceived senses. Through a universal language like mathematics, we are discovering this realm is not only more mysterious and complex than we ever imagined, it is ultimately spiritual in nature ... with consciousness itself playing a vast role capable of influencing the material world.

After the mysterious disappearance of her father in 1994, freelance reporter Saeko Kuriyama feels divorced from life. When unexplained phenomenon begin to take hold of Japan – namely individuals and families vanishing into thin air overnight – Saeko feels drawn to the mystery as though it could be her personal calling. Reminiscent of disappearances such as the ghost ship Mary Celeste in 1872, the vanishings begin to spread over the entire continent in what soon becomes a discernible pattern involving fault-lines. When drafted by a magazine editor to explore the vanishing of one Fujimura family, Saeko teams up with a local TV station and a psychic to investigate the case. Together they slowly peel back the layers of a genuine unknown to find something far more sinister than a motley crew of missing persons: an anomaly rooted in natural causes – a profound disturbance in being itself.

For a novel originally composed in another language entirely, the translation here comes off clean. With only one typo apparent, Koji’s syntax is free-flowing and smooth. There are some metaphors just beg to be read out loud, and the overall structure of the writing is intelligent and heart-felt. I suppose one criticism I could level would be the distinct lack of action; there are a lot of scenes where characters (and in particular Seako) spend numerous passages merely ruminating about underlying philosophies, coming to final conclusions only guessed at but then given veracity merely by deduction. However, when dealing with the subject matter (that of quantum horror) it seems Koji has purposefully taken this path. EDGE, for all its wonky science, is a moody journey. When delving into the climax, a reader can almost hear a cinematic soundtrack at the heart of the story ... a sensation not unlike experiencing some of the finer aspects of Gore Verbinski’s The Ring.

An ambitious novel to take on, I can see there will be a few disgruntled readers with the topic at hand, and the blurb attached to various websites and the novel itself is overly misleading with how the story pans out. Personally, however, the focus here is a theme I’ve always held a fascination for: ancient civilizations and the advanced world they left behind. Our known recorded history – the one that we were collectively taught – seems inherently flawed with new evidence coming to light seeming to raise more questions than answers. Through astute personal observations and modern physics, Koji tries to find the answer to those mysteries, and ultimately delivers a unique reading experience reflective of the current cultural climate.