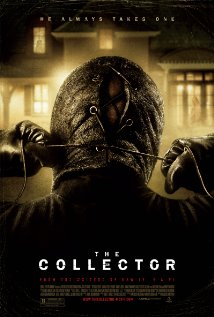 Detroit, Michigan: the Chase family has moved into an isolated mansion far from the city. Renovations have begun in earnest, and taking work at the property as a handyman is troubled Arkin – an ex-con who is now walking the straight and narrow. Though loose ends abound in life ... namely that of large sums of money owed to his ex-wife. If payment of the debt is not made swiftly, his ex-wife’s creditors will soon inflict pain upon the entire family ... including Arkin’s young daughter Cindy.

During the course of his work, Arkin becomes privy to every nook and cranny of the Chase estate, learning its stairways and floorboards intimately - including which wall-mounted piece of art hides Michael Chase’s combination safe. With the life of his family at stake, Arkin must make one last (final and desperate) heist to secure freedom for his daughter.

At first everything seems textbook for the robbery ... but it soon becomes evident another has targeted the family on this particular night. With the entire house rigged with sophisticated booby-traps engineered for maximum suffering, our would-be thief becomes an unwilling witness to his employer’s slow demise at the hands of a masked psychopath. Flitting from room to room in a locked house of horrors and trying desperately to save a family in the process, Arkin’s almost total anonymity now becomes his only way out.

One thing I noticed almost right off the bat: there are a lot of parallels in this narrative and Dean Koontz’s 1995 book Intensity. Both feature an unseen hero in a game of cat and mouse with a similar antagonist. Our ‘collector’ here is a kind of human predator mimicking the world of arachnids by trapping humans in a literal ‘web.’ That’s not to say there isn’t originality; for such a small budget the overall sound and visual aesthetic is unique. Like a dark music video, a heavy atmosphere is married with strobe sequences to create a kind of ‘snuff’ ambience. When the action takes over, the director employs the use of excessive slow motion that might be over the top anywhere else, but somehow feels right at home here. We have the distinct impression this is a film that takes itself seriously. Suspension of belief is required, but it almost always is when dealing with a new threat in the genre.

Although we do not have a lofty horror icon in the offing, there are just enough small highlights to guarantee an extended franchise.