Stuck On You by Jasper Bark 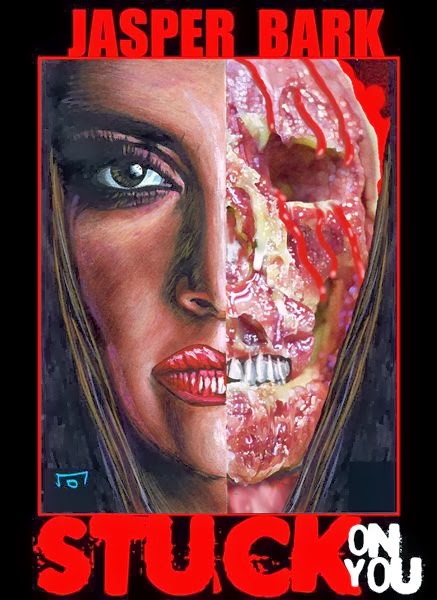 Crystal Lake Publishing is a South African outfit that has (in a very short period of time) established itself at the forefront of quality dark fiction. With a still-building resume including authors such as Gary McMahon and Daniel I Russell, I was more than happy to peruse a small novelette by one Jasper Bark ... a writer to have escaped my attention until now. Initially, I was informed Stuck On You was ‘A twisted erotic horror tale, not for the faint at heart.’ Fair enough. But all too often these kind of descriptions are flaunted in a myriad of genres, so I had no pre-conceived expectations going in.

What I didn’t expect was the publisher’s description to be almost self-deprecating.

For Stuck On You is one of the most harrowing and entertaining pieces of dark fiction any of you are likely to encounter.

Stuck On You is not the kind of story requiring a blurb. In this instance, going in completely blind added to the overall dark surprise. However, for the purposes of any pre-release appraisal, we'll lay out the bare bones. (Though if surprises are what you seek in the shorter form, I believe you can skip this next part without missing a beat).

Ricardo is over the border in Mexico on a buying trip for his artisan-trader wife. On the return journey, he meets Consuela – a drug mule seductress who requests his help making her own border jaunt. Before setting-up the illicit drop, Ricardo and Consuela decide to consummate their taboo tryst in a forest ... one inhabited by nothing but black bears and an incoming storm.

Without giving away the crux of the narrative, these are the fundamentals. But suffice to say, in a very brief stanza, Jasper gives us intense eroticism, gore, and a medical affliction seldom (if ever) tackled in fiction before. Within each small chapter, horror is piled upon horror ...  so that just when you feel safe Jasper decides to throw on yet another layer to the maelstrom. The writing – brutal and unapologetic – is also competent. And hovering under the surface is a perpetual modicum of droll humor.


Stuck On You will soon be available as a stand-alone eBook novelette in late March. Two months later, Crystal Lake Publishing will present Jasper Bark’s Stuck On You and Other Prime Cuts – an entire collection of similar themed stories available in both paperback and eBook.
Posted by Matthew Tait