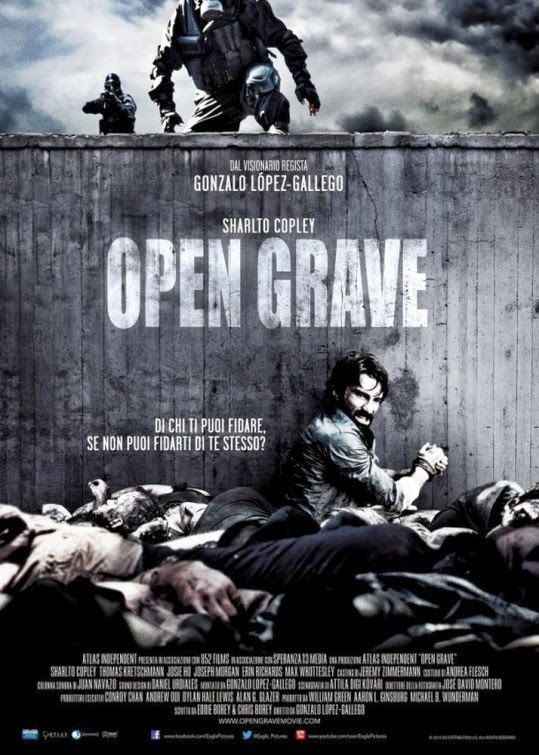 There is an old school plot device that occasionally works well: protagonist wakes up in the aftermath of a serious crime with no memory of how they arrived there ... and (sometimes) cannot recall their very identity. This sets up an interesting premise: is the newly awakened person a victim of the crime or its perpetrator? Will they recall their identity in a blaze of revelation or will recollection take place over the course of the story?

Such is the case in the opening frames of Open Grave: a brutal and harrowing scene involving District 9’s Shartlo Copley awakening in a wilderness pit chock full of dead bodies in various stages of decomposistion. Above, a storm is raging – and our main man does not recall who he is or how he arrived. After escaping the ossuary, our John Doe comes into even more mystery: a mansion full of five other occupants (a mute girl, a German, and three other Americans) – all of whom are just as ignorant. Though each individual discovers an identification card, trust levels are frayed to nonexistent and the group will duel in a desperate game to piece together the enigma.

And the mystery? In addition to the charnel pit, the entire backwoods property is surrounded by human beings in the throes of Rigor Mortis – some of them stapled to trees with barbed-wire; others perishing by additional agonies. And during it all, our strangers are slowly recalling in flashback snippets what came before: a viral outbreak of some kind? Were medical experiments performed on the compound? Were each of them friend or foe? This is the second act, and it is here the traits of all involved begin to shine: superb direction, masterful editing, and a chilling, appropriate score. Though Shartlo Copley’s South African accent at times tries to bleed in, he still manages to hold his ground for the most part and give a performance where it’s hard to envisage anybody else taking the lead.

Despite a somewhat slow build up to the finale, we have here a refreshingly original set-up. It’s bleak (the tone gaudy and liquorice stained), and it’s suspenseful. Most of all the film is leagues ahead of director Gonzalo López-Gallego’s previous Hollywood effort Apollo 18. With Gonzalo now setting up impressive fiefdom in the science fiction and horror genre, the only downside here was Open Grave receiving little to no theatrical attention.