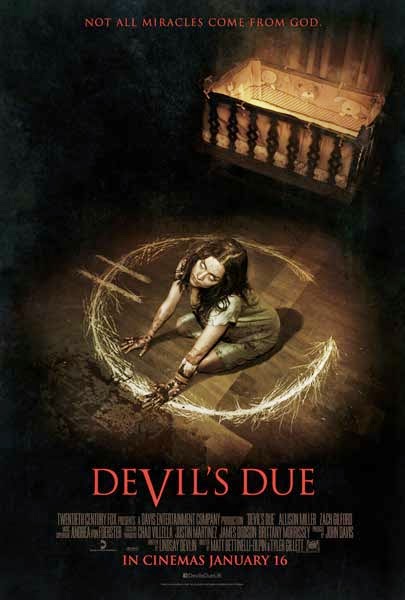 Everywhere we look nowadays a ‘footage’ film is being churned out somewhere. Whether you love or hate this distinct sub-genre (shaky camera work and naturalistic acting) – it matters little in today’s climate, because they are certainly here to stay. Not only are such films inexpensive, they consistently make a truck load of money. While some skate the fringes of accomplished viewing (REC), others fall so far below the paradigm of what constitutes effective film-making they should be regulated to the annals of direct-to-video cannon in perpetuity. When it was announced a while back that a ‘found footage take’ on Rosemary’s Baby and The Omen was in the offing (and that director's from a segment of the film VHS had been acquired for helming duties), one could almost envision the end result without viewing a single frame.


Recently married young Americans Samantha and Zach McCall are going on a honeymoon. Their destination: the Dominican Republic. One night, after getting waylaid returning back to their motel, an assertive cab driver seduces them into trying out an underground bar ... one presumably not located on any map. After experiencing this somewhat taboo club, the footage then shifts to jerky scenes evocative of dark worship; the chanting and supplications of a cult satanic in nature. The next morning (and with no memory of the jaunt back), both Samantha and Zach fly home to the United States. Not long after – despite being religious about birth control - Samantha falls pregnant. And thus begins a lackluster and derivative premise.

What follows is everything you would expect when giving birth to Satan: Samantha experiences nosebleeds, fugue states, and a burgeoning disdain for her new hubby. Previously a vegetarian, raw meat is abruptly on the agenda. (Even the variety consumed in public supermarkets). On the street outside the McCall’s home, sinister and shady character's make a habit of loitering about. Though the territory here is well mapped, there are (of course) small and quiet moments of merit. In this found footage era, jump scares are ubiquitous, and the viewer will find an occasional one that works. What doesn’t work is mining the techniques of others, even going so far as to mimic recent outings like Chronicle. In this regard, the makers have turned homage into a banal science.

Other virtues? There aren’t many ... though our lead actor (Allison Miller) does a more than competent job with what’s on offer, eliciting creepy stares spliced with her genuine girl-next-door persona. Another positive would be the film’s overall modernity: mainstream releases in 2014 are all going to have a polished sheen, regardless of budget constraints. And, toward the climax, there are more than a few effective effects.

But sadly these aren’t enough to atone for Devil’s Due overall blandness: eight-nine minutes of home video that is (at times) insipid viewing for all.