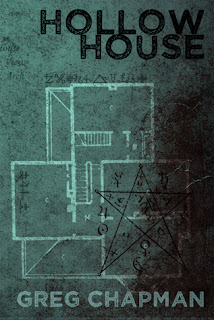 The author under the spotlight here needs no introduction. Greg Chapman has worked for years now to shed light on the many mediums of horror, both through his own work (novellas, illustrations, and design work), and the work of others; being a vocal mouthpiece for the literary achievements of friends and colleagues and helping to establish horror as a serious genre both in his native Australia and abroad. Earlier this year, Omnium Gatherum saw fit to publish Greg’s first stab at novel length fiction. Already, Hollow House has picked up some favorable reviews.

Without delving too deeply into plot territory (the bare bones of this can found both in the novel’s description and the many assessments floating around), let’s examine instead both the positives and pitfalls. In Hollow House, the scene is set with an archetypal haunted house at the center of the maelstrom: Kemper House on Willow Street. Surrounding the house, numerous players (the immediate neighbors) are drawn into a spiraling web of death, possession, and desires made manifest. In effect, Greg is taking the inhuman aspect (the house), and using it as a springboard to see how his character's behave and interact. If I could compare this formula to other works, we can see a similar method explored in novels such as Richard Bachman’s The Regulators, and the darker fantasy of both Bloch and Bradbury.

The positive aspects of this novel derive from the human element; Greg has sketched out numerous damaged characters that are a real-life echo one would find on any suburban street: angst ridden teenagers, a retired Army Vet, and the conventional large family. Witnessing how they cope with a house of horrors is an entertaining testament to Greg’s burgeoning storytelling prowess. However, there are pitfalls, and this is often the generic make-up of certain gambits. For instance, opening up proceedings with something as arbitrary as a dead body. In addition to this, having a reporter on the prowl to uncoil layers of information has its DNA firmly entrenched in dozens of horror films.

Small drawbacks aside, this is a novel showcasing genuine heart with some adequate turns of phrase. Above all, it’s a competent signpost of what to expect. With Hollow House, Greg Chapman is merely laying down the load-bearing foundations of a universe of horror to come.