Pilgrims by Will Elliot 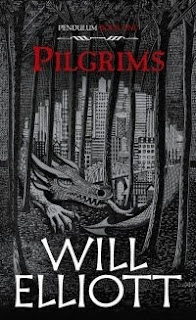 An author needing no introduction, Will Elliot burst onto mainstream stage from relative obscurity after winning the ABC manuscript award with The Pilo Family Circus. It was a novel of disturbing ideas and grisly images that took on a life of its own, breathing fresh blood into the Australian literary scene and showcasing young talent could contend with giants on a world stage. With Pilgrims, Elliot shifts gears in a largely new direction, moving into the invented world genre and attempting to explode its conventions from within.

From experience, I think there comes a time in a writers life when they think: now is the time to do my ‘otherworld’ book. Be it a dominion, realm, dimension ... or simply world – it seems ingrained this is accomplished as a kind of Magnum Opus or literary Jupiter dwarfing all other novels, novellas, or shorts. Although it took a lifetime, King himself achieved this milestone with The Dark Tower. Numerous other's have made it a staple: Clive Barker’s descriptions of wonderland are like a tour guide for every intrepid wanderer who feels the need to portray their own otherland. The hybrid of dark fantasy and horror is presently well-mapped … now the challenge is to find something unique and powerful to dig out of the sand. For the most part, Elliot succeeds with Pilgrims, book one of the Pendulum trilogy.

Eric Albright (a protagonist with shades of Elliot I suspect), has discovered a small red door underneath a train bridge near his home. His wing-man in the unearthing is Stuart Case, a homeless alcoholic who accompanies Eric through the door into Levaal … the adjacent realm next to ours brimming with magic and all the ingredients we have come to expect from fantasy. We are on familiar ground, and Eric knows it. More than once he voices the opinion that because he is from our world, he must be its savoir. Both Eric and Case become part of a quest that is fragmentary in the details, but mainly about survival. A numerous and varied cast is introduced, and reader's will see creatures of staggering descriptions populate the world of Levaal. There are War Mages, flying Invia, Gods and Great Spirits. There are those that are free, and those that are not … as the current resident of the Castle, Vous, has turned his beacon of magic into a house of malign purpose with the hopes of ascending to Godhood.

Pilgrims as a book reflects journey. The kind of book, perhaps, that’s perfect for one's own voyage. For some peculiar reason, I found myself digging into this narrative always on the move: intersections, bus trips, and even one occasion when hiking. At times it can be stagnant; the action and mystery of a type encountered in a myriad of previous fictions. However, our language feels both familiar and intimate: the Australian voice homely. Above all, Elliot wants to transport us to his Narnia and the world of his childhood. Although a far cry from his debut, Pilgrims nevertheless acts as a worthy successor.