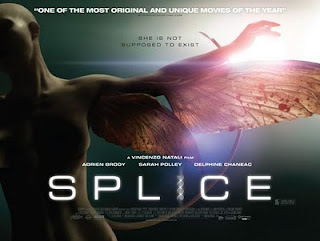 Vincenzo Natali has become somewhat of a sci-fi cult director in recent years, helming the celebrated Cube. Although not quite mainstream, his other foray Cypher showcased a director that isn’t reluctant to call science fiction his home. Too often in the past, those with a penchant for the speculative move away into more serious genres when discovering greater clout to wield. Thus the David Cronenberg’s of the world are a seldom phenomena who should be treasured. Natali is one such director still finding his feet. With Splice, he moves entirely into the mainstream.

A scientist team who are also a couple, Elsa (Sarah Polley) and Clive (Adrian Brody), are on the cutting edge of human/animal gene splicing, trying to develop a protein for a major corporation. When their experiments herald the arrival of new species, they decide to go rouge and take it to the next level: splicing human and animal DNA. When each small breakthrough leads to another victory, the scientists set in motion an irrevocable chain of events yielding Dren … an entirely new progeny female in gender and having hybrid characteristics.

Fitting this particular premise (the mad scientist) are the typical plot-offshoots seeming to go hand and hand with it:  the ethical and moral dilemmas … is it right to play with God’s codes if it could lead to a victory over disease? And is there an ultimate price to pay if we succeed? Of course, there is nothing new here – but we get the feeling there isn’t really supposed to be. The characters of Elsa and Clive are even named as a homage to central characters in Bride of Frankenstein. That said, the first half of the film does feel original in its execution, with the real star here Dren. No run-of-the-mill Alien/Species knock-off, watching her grow and learn at a breakneck pace is disconcerting to say the least; her CGI is flawless, giving an authentic performance that, once married with regular prosthetics, will leave you feeling prickly with dread.

Throughout, there is the undercurrent of the domestic, as Elsa’s and Clive’s personal relationship and unresolved personal issues fall into disarray. In this regard, there was so much to like, but what ultimately lets the film down is a finale that feels tacked on and sinks to the level of the director's cheaper films. Obvious re-writes are layered on as though no one (including the director), knew how to wrap things up ... and one unexpected development comes along that is so implausible it’s almost laughable. From here, any aficionado can guess where things end up.

But this does not take away the films gains, and having an A lister like Brody elevates the production into something deserving of theatrical release. French actress Delphine Chaneac will make you both feel for and fear Dren at the same time. This alone makes Splice a small triumph.