The Burning by Bentley Little 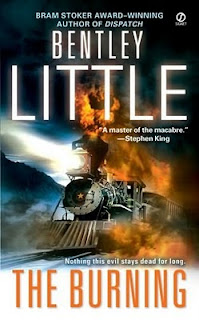 Like many horror writers working today, Bentley Little has crafted a style all his own own. While his books invariably follow a formula, it is a well-mapped formula, ensuring a dedicated audience and often-imitated writing method.
Little's dedication in The Burning is interesting, and gives a fascinating insight into the roots of stories and how they manifest and evolve. In this case, Bentley' son requested a story including a haunted train and two graves marked Mother and Daughter, respectively. Taper this with his method, and Little delivers a simple, elegant novel with no pretensions about its grassroots influence.
As with previous forays, our narrative is heavily influenced by a Chinese mythology. In The Burning we have Angela Ramos, an h student who has just moved away from home into a share house with a ghost. There’s Henry Cote, a Native American Park Ranger plagued by perverse, erotic dreams of Chinese twins who haunt the Canyonlands. Recently divorced Joylene has moved to Bear Flats with her son Skylar to start a new life living with mother … soon to come across the eerie graves of Mother and Daughter. So too will they witness the gaunt, leprous face that peers in at Skylar during the night, grinning malevolently. And finally a Chinese American, criss-crossing the country on a journey of self discovery, being called toward something he only partially understands; toward ancient ancestors seeking redemption for past transgressions.

At the center of this group (and slowly peeled away through their strange encounters), a hellish Train raised from the bowels of history and carrying the departed souls of different races seeks reprisal. Those that have been wronged by Caucasian man since the Civil War and beyond.

At its heart, The Burning is primarily a revenge novel, seen through the eyes of very disparate characters trying to connect the dots before the inevitable showdown as our train finally pulls into its metaphorical station. What I liked about this novel – as apposed to Bentley’s previous outings – was the more worldly aspect to it. Too often, Bentley concentrates on small-town mythos (and though this is a perfectly honorable way to tell the tale), it was utterly gratifying to see things like the White House being laid waste to eternal powers. Moreover, our trips back in time to witness heinous acts committed by those before the turn of the last century. And it does this without being too preachy or trying broadcast a message.

There exists another horror review site that parcels out stars based on the smell of a book. A little eccentric, but one oddity I think we all can relate to. In the spirit of this, I give The Burning 5/5.