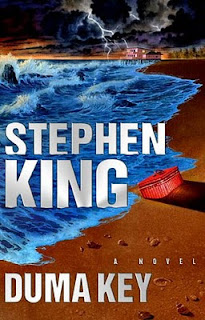 Few King novels in recent history have reviewed quite as well as Duma Key. Not only were the preliminary appraisals heaped with acclaim, but the usual naysayers and flame throwers seemed to have battened on to this novel as though it were a life raft amid a sea of literary chaos. There is some merit to all of this, of course. If a majority lean toward it favorably, then there is every chance the novel is favorable.

Let's set the scene, shall we? Edgar Freemantle, big boy in the construction business, is involved in a freak accident which tears off his right arm, and subsequently severs his marriage. After the suicidal thoughts and rage subside, Edgar heads to the Florida Coast of Duma Key to heal himself of the physical and cerebral demons. There he rents a sea-side dwelling named Salmon Pink (later nick-named Big Pink). In this environ he takes up the childhood passion of sketching and painting ... talents seemingly harmless to begin with soon take root into something dangerous and malign.

Told in first person, King's prose is simple and elegant; in a nutshell, its pure storytelling. While the syntax can be (at times) cumbersome, I've yet to read a King novel yet that doesn't bloat to some extent. In some ways, it's what makes his tomes worth the wait and money. One could (almost) say it's what makes them endearing.

Upon moving to , Edgar strikes up a relationship with his neighbors: Jerome Wireman, an ageing Hispanic. And Elizabeth Westlake, Wireman's elderly charge who has developed Alzheimer's in her twilight years. Inheriting her house (El Palacio) from a tycoon father, Elizabeth also owns Big Pink and a huge chunk of Duma estate. Soon, Edgar begins painting, and with such a location, his inspirational tools never run dry.

Now onto the supernatural happenings: As in the The Dead Zone, King's protagonist develops extra-sensory prowess. In this instance, they're related to art, seemingly caused by Edgar's phantom limb. Without giving too much away regarding this, I'll say some of this art, aside from paintings of Duma itself, feature characters from his past and present life. His powers enable him to ... change things. One aspect that (irks) me with this premise are similarities to The Dead Zone. For no apparent reason, cataclysmic events seem to surround almost everybody. Something bad, exceptionally bad, besieges these individuals. Sure, a lot of people have skeletons. But it all feels a little too convoluted; too convenient. When Edgar charges himself with remedying these adversaries, you can probably guess the results.

Journeying with Edgar as he finds his muse, a reader will be completely taken in. The sights and sounds of Duma Key, as well as Edgar's use of art as medication, create a tapestry of emotion and feeling that is vintage King. Personally, I never tire of the authors beliefs concerning art. Whether it's writing, painting, or even music, King has his finger pressed firmly on the button detailing these acts of the mind. Minor pitfalls: perhaps there are too many scenes before the action cranks up: the trivialities of family; the slow process that sees Edgar find an audience for his work. In the build up to the ending, plot lines can become somewhat mystifying, but instinct told me this was nothing a second reading couldn't cure.

During his career, Stephen King has made the nostalgia of certain times and places resonate with aching clarity.

Duma Key is no exception.