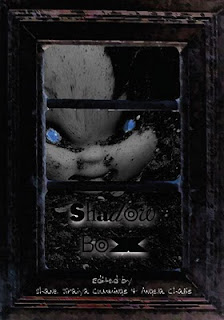 And make no mistake: substance abounds in Shadow Box. What we have received is a totally original, well-crafted masterpiece for the masses. Its sheer volume - seventy slices of dark flash fiction and artwork - does not hinder the experience, only enhances it as a fusion of these elements into a digital event. Our journey is unique, filled with bridges and by-ways, turnpikes and intersections ultimately leading to a kind of nirvana in Hell.

'Come play with me' a sinister-looking doll asks the reader as a malign child caterwauls in the background. It's as fitting a start as any, and even prompted a panicked response from another person who was present in the room. Effects with sound are short, but if turned up loud enough, are effective at grabbing your attention. Some of my favorites in the first half include: Coming Home by Rick Kennett; this is extremely short, but a doozy. Entwined by Chris Barnes, a piece with gothic substance. Changing by Susan Wardle is charged with an erotic, almost incestuous feel. And Clown Face by Daniel Slaten is accompanied by one of the best pieces of art entitled 'Smile'. The editor, Shane, leaves us feeling uneasy with summer after penning a trinity of flash (in the first half), where blood reigns on a beach.

By this stage we've been given the gift of the genre: a cold comfort and a convergence of emotions. For this reviewer, flash has often been ambiguous, with other publications showcasing efforts that ultimately leave me perplexed. But this is not the case with Shadow Box. Each story, effectively, was easy to comprehend. And I have a new-found respect for this kind of author. Within only a few lines of stanza, talent is apparent.

In the second half, cream rises to the top with: The Capture Diamonds by Karron Warren. Here, words such as meat-eater, amputate, and human ash are not wasted. Light by Christian Girard encompasses a species of prose I haven't quite encountered before. For gross-out factor, consult Smooth Trajectory by Esteban Silvani. And for ghost factor, the dead have a voice in Listen by Horrorscope's own Stephanie Gunn.

By and large, Shadow Box has everything on show. From award winning authors to the up-and-coming, this e-anthology is a must-have for all fans of dark literature. And if this isn't enough, all profits will benefit charity and The Australian Horror Writers Association. In 2006, we are privileged enough to have a sequel. Entitled, Black Box, the horror community waits with bated breath.
Posted by Matthew Tait