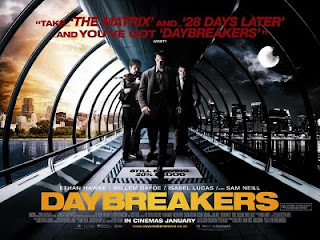 After its theatrical release, there has already been a lot of talk and reviews of Daybreakers, the second full-length outing by ’s Spierig Brothers, who were behind the 2003 semi-cult Zombie extravaganza Undead. So I won’t bore you with many particulars.

It’s 2019, and the script has broken genre stereotypes by granting us a vision of vampires seldom visited: they govern the world, and a massive corporation has seen fit to round up the last of the human race for consumption lest their population succumb to extinction. This in itself is fascinating, a plot device which mirrors our own world, and one with the potential to promote endless discussion. The sphere has been flipped, but is ultimately the same: blood being a metaphor for resources like food and oil. Thereafter ethical and moral questions present themselves ... as those left try to find a substitute or cure for the life-force of survival.

Edward Dalton (Ethan Hawke) is one such individual, a hematologist working for a pharmaceutical company. His allegiance to his kindred race is waning … fueled by slowly-eradicating memories and the farming of the race he once belonged to (think a Matrix-like landscape of human production lines). Impeding the work is another addition to vampire society: a ghastly sub-species that has succumbed to blood undernourishment and is living in the squalid depths of depravity, feasting on anything and severely deformed.

Daybreakers is an American and Australian hybrid of a movie, and at the beginning, this can be grating. Obvious Australian back-drops, accents, and actors have been merged with American enterprise. Initially, the dialogue is awkward (and somewhat embarrassing), but as our story chugs along, the lines are blurred, a stride is found, and everything coalesces. Visually, the concepts that come to life are spectacular, and I can only fantasize about how fun it was for the story-board artists and imaginers. The Sun, in particular, is mined like a character itself ... and I was happily reminded of some of the awesome planetary sequences in Pitch Black (another one filmed in ), whereby we are granted a feast for the senses. Dark and gothic, the cities are transformed into a Cimmerian wonderland of black elegance. Let’s be honest, the vampires here just look cool. And seeing an entire population of transformed eyes will appeal to any purveyor of the macabre. There is also a disquieting element, and the images associated with the holocaust are palpable.

Like other films of this stripe, there is an uprising of the repressed (in this case the humans, led by Willem Dafoe). Having an established acting cartel does bring the film to greater heights, and I have a feeling it would be much impoverished without Hawke’s sympathetic performance. There will also be many discussions about the type of vampire presented, for traditional dispatching methods are not brought into effect until the end.

Ultimately, I enjoyed my time with Daybreakers. Let’s hope this is just the beginning of a long road the brothers have in store for us …
Posted by Matthew Tait 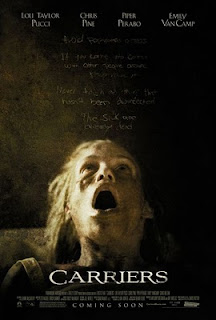 A unique apocalypse has devastated the world, and brothers Brain and Danny are on a pilgrimage across the country to their childhood haunt … a holiday house on the ocean where perhaps they can weather the storm of an airborne virus that infects its human hosts with ultimate death. Tagging along with the brothers are Brian’s girlfriend Bobby and their friend Kate. When encountering a father and his infected daughter who have run out of gas in the middle of nowhere, their trip takes a detour ... and they will discover they have more to fear from each other than any virus.
From the out-set, we are only given cursory hints as to what the world (and our individuals) have been dealt – and this works. The mystery could entail many things on the menu: most notably zombies, but it manages to avoid the old tropes and goes straight for the heart. I use the word ‘unique’ as this is a film that has taken a different route from others in the genre. Sure, there are shades of many of its predecessors. Most notably outings like 28 Days Later and literature like The Stand and Night Surf. But Carriers is infused with a domestic human element making it worthy of distinctive praise. Throughout, we are treated to some unnerving acts as our characters attempt to deal with the illness - such as the dilemma pertinent to so many Zombie films: after infection occurs, a pretence goes on they are not infected. It’s designed in a way to make the viewer feel contaminated, and more than once I found myself wiping a hand across my sleeve. Though lacking gore and action, the real violence boils down to the callous lengths people will go to when their own survival is in question.

Someone pointed out recently the current crop of horror movies being released is in a downward spiral. They may be right, but every so often a film like Carriers comes along and stems the flow.