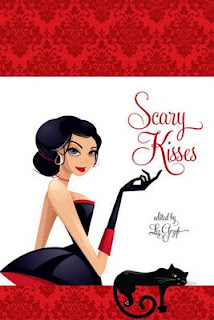 Already garnering a lot of high praise in the community, Scary Kisses is a dark fantasy anthology released in early 2010. It features a huge chunk of authors from the entire Australian speculative league, and the impact of its success has guaranteed a sequel of sorts with the upcoming More Scary Kisses. Beginning with the title of each tale, let’s have a look at all the stories individually:

Set among wilds of the Australian outback, this is the story of a small community who bands together under the threat of an unknown assailant attacking livestock. Rumours abound of the elusive big-cats haunting the rough country. Ally, local wise woman and head of the Anstruther farm, works together with local legend Tynan to solve the mystery. What I liked here was the almost gothic flavour Nicole imbues into the story - although set in Australia it has a decidedly New England feel.

Fade Away by Ian Nichols

After a sea change to an island off the mainland, Emily is haunted by something like a transparent lover. We are then greeted with revelations pertaining to a convicts past. A small ghost story with an unsettling ending of immortality.

Bread and Circuses by Felicity Grey

Probably the most notorious story to come out of Scary Kisses, Bread and Circuses is a brutal and unrelenting excursion. To be honest, after all the hype, this reader’s first reaction was: It’s only a simple Zombie tale? But simple stops after the first page. This is the narrative of Susan, a star-crossed lover living amid the hell of a bored and jaded community of cemetery survivors. It unfolds at a rapid clip with the duel themes of love and death parked behind the gates of a Zombie horde. The prose is a bit like the authors nature: wicked, unflinching and with a subtle hint of dry humour underneath. The title here is Scary Kisses … and there is a literal kiss at the end of this one seldom brought about in horror fiction.

This wouldn’t be a Paranormal Romance compilation without a subset of vampire stories. Black Widow tells the story of an incarnate vampire who is made flesh as a prostitute in Las Vegas and begins the hunt afresh. Simple but fun.

The February Dragon by Angela Slatter and L.L Hannett

This writing duo has been behind many stories in the past – and it’s easy to see why the collaboration continues. Set entirely in the world of Sepphoris, you have to hand it to the writer's for condensing and world-building in such a short space. In this realm, Casco is a startling hybrid of human and Dragon living in the confines of a feudal House. Her talents as an artist see her as prize possession, and soon an unwanted marriage ensues. Primarily a love fable, this is the story of a young woman willing to cross the borders of the human to be with the creature she truly desires.

One that left a confusing imprint. On the second read-through I ascertained the story is perhaps the poetry of a serial killer … one whose local environs and their silence are like a metaphor for the white noise of his mind.

The Hidden One by Astrid Cooper

It’s always a good thing when a tale resonates on a personal level. Tez is a midnight cleaner in a museum of Egyptian artifacts in Adelaide. (I have actually worked in a Museum – and, of course, I reside in Adelaide). With a fellow employee acting as a kind of guide and mentor, aspiring writer Tez sees her world flip upside down when the wizard Ammon awakes from his slumber. Regrettably it slides somewhat into a furor of Hollywood clichés and weak special effects – but ultimately a small piece of entertainment and worthy of its inclusion.

A Darker Shade of Pale by David Bofinger

Much like the previous story Black Widow, this is another vampire tale – this time with an adventurous female model in the middle. Not exactly revelatory or filled with anything new, but it delivers what it intends to be.

The Valley by Martin Livings

Another confusing one that is oftentimes bleak; I will admit to not knowing exactly what was transpiring here. It’s a kind of sojourn featuring a man caught in a netherworld on the cusp of Heaven and Earth. He seeks redemption. The narrative seems to be a modern take on an old fable, but one I cannot put my finger on. I imagine it has a different meaning for different readers.

Cursebreaker: The Welsh Widow and the Wandering Wooer by Kyla Ward

With a word count running into novella territory, readers will be split in two minds with this one. On one hand it is a completely original gothic parable of a Doctor and a Cursebreaker sent to the estate of a blighted family whose wedding celebrations take a macabre turn. At times whimsical and hair-raising; at other times simply impenetrable and hard to nail down, a reader can’t help but be swept away by it all. One thing I do know for sure: author Kyla Ward has lived previous lives.

Probably my least favourite of the collection, Heat is mainly for the romantics out there … but it also has a smattering of high-toned sex. Once again we deal with the paranormal of Vampires.

After the often intense previous stories, Phaedra was the perfect balm to take a break from it all. Simply a story of a voluptuous cartoon that breaks out of her realm and into the real world of our protagonist to fulfill his sexual desires. Light on substance but very easy on the eyes.

Date With a Vampire by Annette Backshawl

One of the better vampire stories here, Annette has constructed a homely tale filled with pop culture and internet references that almost makes it meta vampire fiction. An entertaining girl meets vampire allegory.

Pride and Tentacles by D.C White

Symmetry is served with this perfect little ditty as the creatures from Lovecraft’s mythos get together as a bookclub to talk about some of the more popular romantic genre fiction. With this, we go out with a grin.

Long-time readers of HorrorScope might be somewhat surprised to know I found a lot to like here in this gargantuan sub-genre that is often maligned. One thing that probably doesn’t get mentioned enough in the reading experience: typesetting and font. Scary Kisses is my first Ticonderoga publication and has both these boxes ticked to make for a dark but nimble read.

An Eclectic Slice of Life 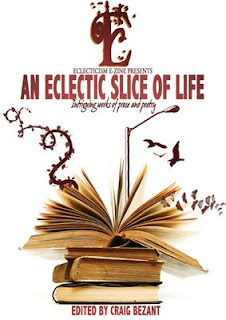 In the previous review, Gillian Pollack kindly illustrated for the reader where the genesis for this collection sprang from. From 2007 onward, editor Craig Bezant sorted through his kaleidoscopic tree of stories to bring us the best Eclecticism E-Zine has to offer in a broad and wide ranging print edition - the first from his newly hatched small press Dark Prints Press.  Featuring a cover illustration of finely stacked antique books, this nostalgic approach reflects the new metamorphosis from computer to paper. A kind of reverse de-evolution that will please an all-new readership of Craig’s dark little e-zine.

We kick off with Iron Efficient by Simon James - a worthy opener and one of the standouts in the collection. At its centre a small domestic revenge tale, the author uses a familiar setting and objects to highlight the need for change in an abused woman’s life: one of those guilty pleasures where the antagonist gets his just desserts. Simon also has another highlight here with Pieces – an absolutely confusing mishmash of story but it can be read for the highbrow prose alone. In what is one of the only forays into science fiction territory author Joseph D’Lacy contributes Drone … a beautifully rendered post-apocalyptic landscape of primitive human transmutation but in a magical and revolutionary setting.

Fantastical Twists present some of the first stories I’ve read by South Australian Jason Fischer. Both Houndkin and The Ward of Hours take on mythological creatures set against eccentric backdrops: one in a hospital ward that lies at the nexus of time. The prose is mature and effortless … and it’s easy to see the argument for his success. The segment also presents one of the more bizarre but attention-grabbing stories: Prodigal Son by Mark McAuliffe. This is the tale of Tony Andrews, who returns home to his mother after a life of crime seeking forgiveness and shelter. But what she has in store for him is something rarely encountered in fiction.

I was somewhat apprehensive about approaching the last section – Obligatory Dramas - and for the most part my concern was well-founded. Having not read many dramas (short fiction or otherwise), at all over the past few years I didn’t see the need for any to be included in an anthology primarily speculative. Or why, exactly, they were obligatory. That’s not to say all the stories were poor. But I kept waiting for a punch-line that simply didn’t happen. For example, the story Audrey’s Fall could merely be described thus: A woman who might have a brain tumor goes to the hospital. And that’s it – there is no other redeeming merit to it. The Shopkeeper by Eril Riley is a painful slog about a  immigrant living in . His dog perishes and he buries it. As an honest reader giving my reaction, I would have to describe some of these as ‘A bunch of stuff that happens’ with no literary payoff. That said, there were some gems nestled among it – namely Lost in the City by Julia Bannigan and The Workman’s Pandora’s Box by Myra King.

In the aftermath of putting this debut book down I can candidly state An Eclectic Slice of Life as a whole is a worthy publication. Perhaps not as dark as some of you may expect, but I have the feeling visceral horror is not what our editor was aiming for. With this and the e-zine (of which small amounts of poetry are included), the stories aim to shift the reader into another foggy realm … perhaps not a terrifying one, but certainly lopsided and jilted at the edges. This is only the beginning for Dark Prints Press, and it will be interesting to see where Craig takes us with his forthcoming publications Surviving the Dead (March 2012), and The One That Got Away (February 2012).