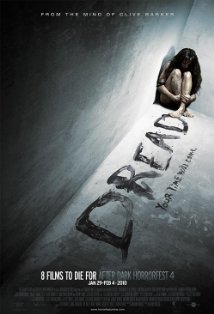 There is no delight the equal of dread.

So begins the opening paragraph of a pivotal short story from the myriad of tales presented in Clive Barker's ground-breaking collection Books of Blood. Dread, a harrowing excursion into the nature of fear, stood out from others in the pantheon.

Many years later we finally have a film adaptation from the funhouse that yielded semi-successful outings including Rawhead Rex, Candyman, Lord of Illusions, Book of Blood and The  Meat Train. And it could not come at a more pertinent time. With the expansion of the splatter-porn field now firmly entrenched in the scaffold of the genre, I feel the original architects of such tales deserve their voice to be heard before we become swamped in a mire of imitation and unsympathetic translations lacking metaphor. Although shocking in tone, Clive Barker’s tiny tale of Quaid and his philosophical relationship with the ‘Beast’ of fear is somewhat loftier than the usual horrors.

Jackson Rathbone plays Stephen Grace, a University cinema student who becomes acquainted with Quaid - a similar individual with a potent story from a past detailing horrific events: Stephen does not drive a vehicle after his sibling died at the wheel, and Quaid is still reeling from being a child witness to his parent’s dismemberment. Already, we are seeing elements deviate from the original story – subtle changes at fist but still keeping with the overall milieu. Quaid then proposes research into people’s fears for their first thesis, and soon they are joined by fellow-student Cheryl, there to document everything on camera. What follows is a character-driven descent into psychological terror with some gut-wrenching scenes.

Initially, I thought the restrained changes (and in particular the casting of Shaun Evans as Quaid) would hinder the build-up. This Quaid feels far too innocent and simple: gone is the dark charisma that made this expert manipulator so enticing. But as the narrative unfolds, Evans begins to exhibit all the distinctive traits needed to flesh out the character. Then, we face the conundrums associated with role-playing our fears … does staring into the eyes of the Beast for long enough finally grant revelation?

Writer/Director Anthony DiBlasi has worked recently on other Barker projects, and the final product of this small-budget outing is ultimately as slick and unnerving as anything released by a major studio. The tone has been honored; the material given a kind of dark reverence showcasing both an understanding of Dread tempered with the need for a clever rearrangement. While not containing the dark grandiosity of previous endeavors such as Lord
of Illusions or Candyman, Dread still manages to find its own shadowy niche in the legendary resume of Clive Barker. 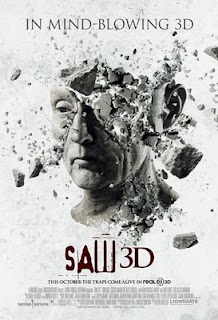 It hardly came as a surprise to the tribe when it was announced the inevitable SAW VII was to be filmed in 3D - perhaps a move that would hopefully make us less desensitized to the now repetitious ‘traps’ percolating through one of the most lucrative horror franchises of all time. Dealing with yet another mind-numbing circuitous plot might be worth it to see what story-board designers could envisage trying to hang ropey intestines and viscera all over a viewer’s 3D glasses.

We open with the usual fare, and at first it seemed SAW 3D was vying into new territory … more darkly comical and conceivably something like the last Final Destination whereby it moves in self-parody or satire. That notion is quelled in a hurry as we realize that what’s on offer is yet another unbroken continuation of the Jigsaw mythology … now a Russian doll tale that is a jigsaw within itself.

Bobby Dagan (Sean Patrick Flanery looking a little worse for wear) is a ‘Jigsaw survivor’ who has become a small celebrity by writing a book and doing the talk-show route detailing his experiences. He even holds morbid meetings not unlike AA whereby other survivors band together to give their take on the pitfalls and/or liberating effects of being unwilling participants in the serial killers game. Subsequently, he and his associates are abducted by Jigsaw’s newest torch-bearer Detective Hoffman (Costas Mandylor), and off we go on another merry-go-round of torture-porn.

The celebrity angle was a good one - and all the components were there to elevate Saw 3D into a suspenseful climax that might hopefully bring closure or possibly a deus ex machina to round off the legacy. Sadly, something is lacking, and I found the previous plot-device of a medical insurance corporation much more appealing than this often bloated and imitating work. Of course, we probably threw out ‘could this really happen?’ about four films ago and can happily suspend disbelief for the sake of cinema. But somehow this didn’t work here, and the elaborate processes to set such a series of events in motion delve into the land of pure fantasy.

With the conclusion on the horizon, the writer's had an opportunity here to tap into an emotional element, but what what's on offer is more of a jazzed-up musical score overlapping an excursion that still feels like a two-hour music video. (Saw VII actually contains a cameo by 's  ). The inevitable twist is somewhat compelling, almost like SAW’s greatest hits containing a hidden bonus track from the first film made by two Melbourne boys all those years ago. But regrettably, this is not the finale the franchise probably deserves.