The Darkest Shade of Grey by Alan Baxter 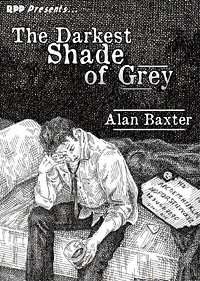 The Red Penny Papers is a journal (electronic) of fantastic fiction publishing novellas in a serial style reminiscent of a bygone era. Merged in this fashion with a webfiction factor and you have an appealing disparity of new technologies with a penny dreadful twist – a welcome hybrid of the modern with the historic. By way of The Darkest Shade of Grey, Alan Baxter has concocted a tight and stylish supernatural thriller daubed in the ethereal tones of film-noir.

David Johanssen is a broken man.  After a devastating encounter with an Ouija board many years previous he has slowly succumbed to a species of insanity, losing his entire family in the process. Now his days are regulated to imbibing huge quantities of alcohol and trying to keep his job as a small time reporter intact. It doesn’t help he has begun to see the auras of those that surround him – colors and ill-defined shapes reflecting a world burgeoning with chaos and mystery. When a hobo drifts into his life espousing the cryptic message of another realm, David is drawn into the dark underbelly of a different world entirely – a world where deities play among the masses and salvation is just a fairy-tale for mortals.

Right off the cusp we’re introduced to Alan’s breezy style, and it’s one most readers of speculative fiction will find easy to digest (if not overly eccentric at times). There’s an every-man quality to the paragraphs with subtle humor smirking from just around the corner. Our protagonist is flawed but ultimately good: a motif that works (especially within the confines of noir) because it taps into a reader’s receptivity. With novella length stories becoming more admired at every turn in the publishing industry, The Darkest Shade of Grey is just the right length to fit nice and snug into a serial arrangement or have a permanent home on an e-reader device.

The only quibble I had (and it’s minor) has to do with a predilection. When Gods and Demons stampede across the pages of dark fiction, I am often disillusioned when they inhabit human form. A perfect example of this would be the dovetailing plot-strands of a TV series like Supernatural. Angels shift into our realm, and when they do, the effect can become juvenile (or comedic) and frequently overshadows any emotional impact we might anticipate.

Predilections aside, this is a skillful little tale from a writer whose evolution has been interesting to watch. Also featured is a mini- author interview where Alan talks about the genesis of David Johanssen.

The Fourth Fog by Chris Daniels 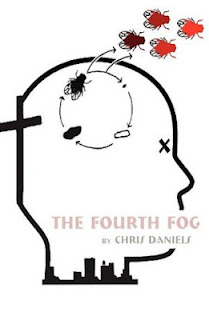 Taking on a novel where one has zero preconceived notions can be liberating. Almost no information about the author exists online ... and there is relatively no news about said book. One of the reasons I do this is to discover works like The Fourth Fog ... a book unique in the genre.

Newlyweds Ben and Tula have moved into area ‘C’ and a new apartment complex. Ben is a book editor surrounded by a mish-mash of unlikable individuals. Tula works as a nurse ... but their home is far from the welcoming sanctuary they envisioned. Soon, an infestation of flies take root as something in the ceiling perishes. Yet the flies appear to be something far more sinister than the common house fly: they have purpose and intent – a malign, elusive quality. Not only that, but Ben has become increasingly dependent on a popular drug called HAL. But are these things the sole cause of Ben's small but meaningful signs of increasing paranoia?

To call this novel ‘bleak’ is an understatement. But I have an inclination this is exactly what the author intended. Beginning with a mere domestic setting, there is a slow build-up of palpable dread, enhanced by Ben’s slow downward spiral into confusion and melancholy. It reaches boiling point when supernatural elements – never overtly defined – are inserted into the mix with gross management but ultimately superior handling. Although the backdrop and plot are pertinent, the whole bizarre thing seems to be a vehicle for the author’s unique prose and depressing (yet droll) social commentary.

With a tag line consisting of: A Horror Novel for the Ages staring God, Terror and (you guessed it)! KILLER FLIES ... The Fourth Fog is more than recommended for those seeking something distinctive and different.