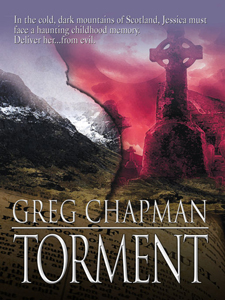 Greg Chapman is one of the breed to have made good use of services provided to emerging Australian horror writers. After joining the local association in 2009, he was selected quickly into the mentoring program under the auspices of author Brett McBean. (Anyone familiar with my reviews will know this to be a coup). What is apparent to blossom from such a relationship is Greg’s genuine fondness for the genre: the act of writing (and finding an audience) not something recently acquired or taken lightly. Something publishers (no doubt) also saw on display.

One thing I feel important to mention here: reading Torment was one of my first experiences with the Kindle device. After a lifetime of dipping my nose into paper for that unique aroma, such quirks were no longer available. However, this is not the place for an active discussion on the disparity between the mediums ... merely an acknowledgment I was initially apprehensive about a potentially great book being let down by a new experience. Thankfully, this wasn't the case: the Kindle device proved more than adequate for the task (and there was nothing about Torment I felt lacking).

Torment as a novella is a tried and true formula: after a childhood incident sees her mother perish at the hands of a clergyman during a ritual exorcism, Jessica McKinnon returns home to rural Scotland years later as an adult with husband and son in tow, there to exorcise some demons of her own: namely, to find out the real reason her father committed suicide and bequeathed the house to her. For me, ‘tried and true’ is a recipe that works – and we’ve seen many writers at the top (a good model would be John Saul) attempt a similar thing dozens of times: After being witness to an act of atrocity as a child, our protagonist returns to the house on haunted hill, there to confront ghosts of the past. Readers will have something to identify with, and for a debut author, this is a definite hook.

There are minor problems, but nearly all these run the gamut of what the premise means on a personal level. The age of ‘biblical baddies’ (as I’ve previously referred to them), traversing the earth and wreaking havoc can sometimes feel as medieval in fiction as they do in real life. We also have syntax that can be straightforward (not entirely unexpected in a debut), and having characters exclaim dialogue is another negligible pet-peeve. But don’t let any of these things sway you. Simply, enjoy Torment for what it is: a more than solid yarn from an Australian author with grand potential and many more tales to come. 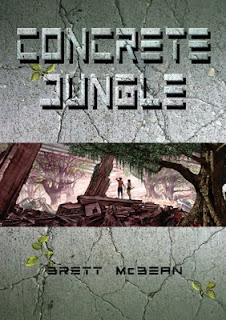 In this, the first of a trilogy, Mother Nature has decided to recycle the earth and spade it under with a fresh Eden. Caught in the tumult are a small cabal of luckless survivors trapped in a Melbourne shopping centre car park late one night near closing time. Paul is a dead-beat Dad on the fringe, making a last minute pit-stop to buy a present for a birthday he almost forgot. Beth and emo daughter Candice have stocked up on movies so Candice doesn’t get bored grounded at home. Harold is a survivor of World War 2 … a man who will soon endure jungle horrors far worse than he ever had to face on a battlefield. And Bruce is just a desperate loner who sees the cataclysm as the perfect excuse for a man to return to a more primitive existence where morals and the rule of law simply do not exist.

Upon Concrete Jungle first being released, I will admit my enthusiasm wasn’t overly high. The cover illustration from a distance seemed to suggest this was mid-range Brett or something of filler in between longer projects. But it’s a judgment I now regret … and goes to show there is talent here consistently producing quality. Moreover, I highly doubt Brett lends his voice to anything half-heartedly or churns something out at the behest of an editor. Concrete Jungle might well be The Day of the Triffids told from the unique scaffold of the author's imagination, but it’s still a narrative with biting simplicity and more than enough lure to hook a reader.

Standing at a short and sweet 160 pages, this is a species of horror without conscience. On more than one occasion I’ve mentioned the similarities Brett has with an author like Richard Laymon - and it’s still evident here, but imbued with refreshing Australian verisimilitude and syntax. A few errors jumped out. In one particular stanza the author describes the smell of meat cooking ‘glorious’ but goes on to say paragraphs later the smell of cooked rat was ‘mildly appetizing’. Viewed as a whole, however, the writing and editing is crisp with short, choppy chapters denied being weighted with numbered sections. Characterization is right on the money: you will care whether these people live or die. And in the modern horror novel, that will be something ultimately on the menu. Welcome to the jungle.