The Force Unleashed by Sean Williams 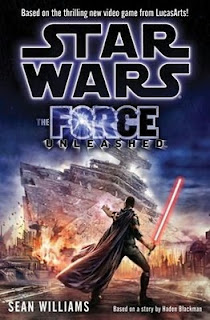 In all, there must be hundreds (if not thousands), of reviews for The Force Unleashed permeating the ether since it was first (unleashed). As a precaution, I have read none of them. HorrorScope has always taken its roots in literature – and that is how I approached The Force Unleashed ... a novel written by a local Australian, one given the opportunity to delve into an elaborate mythology almost unparalleled in its appeal to the world.

That said, there can be no denying what we are dealing with here: although my knowledge of the video-game itself was haphazard at best (I'm a rare gamer), the story-line of Star Wars Episode 3.5 had, of course, trickled into my awareness over time. How could it not? For there is an intrinsic Star Wars fanboy lurking within the psyche of any person who holds speculative fiction close to their heart. And for those of us who ignore the first two prequels as though they did not occur, another invitation to step into the window of the Dark Times. For this is apocalyptic Star Wars; a Star Wars where most childhood fancies have been discarded. Here, a more serious tone has engulfed the galaxy far, far away.

And through that window lies the story of Darth Vader’s secret Sith apprentice Starkiller and his whistle stop tours - a mission to find and squash the last rudimentary fragments of the Jedi, those scattered remnants pocketed throughout the galaxy. Accompanying him on his journey are his droid PROXY and adept female pilot Juno Eclipse. Both have tender and amnesiac pasts full of betrayal, and both are mentally warring within their awareness in relation to duties they perform in the service of the Empire. For gaming fans, I’m sure there is a veritable trove of information pertaining to a character like Juno … but this adaptation itself is complete with enough arc where our protagonist is concerned.

Ensconced in the Rouge Shadow, the unlikely pair world skip from the festering droid wastelands of Raxus Prime to the lush forests of Felucia, encountering hostile natives and inhospitable terrain. Of course, what we have on show is a narrative unmistakably linked to a video-game … but I found myself warming to it. The Force Unleashed is non-stop battle and unrelenting action; descriptive graphics spewing from the page in the author's deft voice, giving rise to an utterly immersive world that will make you blink twice when lifting your head from the page. This is no Disney-esque outing; the Dark Side invades everything, lifting the curtain of a Sith mind denied to us in the prequels.

If the book reinforces anything, it is that Sean Williams is a chameleon writer. As a columnist currently living without deadlines, I cannot imagine the insurmountable pressure involved bringing another's vision to life, making it coherent, and pleasing a population of people without equal in its passion for the images. The Force Unleashed is a even a novel that manages to resonate on an emotional level (with a belter of a finale), so I was somewhat dubious when hearing a sequel is in the works.

However ... knowing that once again its coming from the pen of Sean, reader's shouldn’t be discouraged taking yet another step back into the world of the Dark Times. 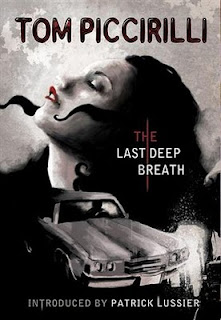 Another prolific writer whose talents have managed to slip under the radar, Tom Piccirilli is a four time Bram Stoker winner with over twenty novels to his credit and a slew of shorter tales ranging the gamut of mystery, thriller, horror, erotica and science fiction. A heavy-hitter in the horror clique, his name has clout – so I was excited to finally delve into his take on the novella form with Tasmaniac Publications The Last Deep Breath.

Even from the illustration and from Tom’s reputation, I pieced together this is a kind film-noir frolic and that’s exactly what's offer. The story follows Grey, a washed out drifter with no clear idea or centralized compass on where he wants to be - he only knows he must find his foster sister before the excesses of the world kill her. After both of them escaped the tortuous embrace of abusive foster parents, their crimes have seen them go in different directions … and his sister only desires reconciliation when death is just around the corner. After another vanishing act he follows her again – this time into the bustling heart of . Soon he is seduced into a dirty world of scummy agents, fading movie stars, and half-baked leads.

The first thing that jumped out was the prose: Tom’s style is immediately accessible and I’ve always been partial to writers who are not afraid to lay on heavy doses of metaphor. Though somewhat grating at the beginning: to be sucked into a hard-boiled world set in the present day (let’s face it, most of us are conditioned to see this world through black and white sepia mirroring the styles of a bygone era). But this knee-jerk reaction is probably caused by not reading far or wide enough in the genre. Having never tackled a tome by Elmore Leonard, unfortunately my familiarity with the genus extends no further than films like Get Shorty with the locale setting of Mulholland Drive

To top it off there is a bonus short Between the Dark and Daylight, a completely original and funny romp whose idea might have been spawned by the real life ‘balloon boy’ saga that dominated headlines some time back. Although comical, it’s still skewed with a penchant for violence.