The Concrete Grove by Gary McMahon 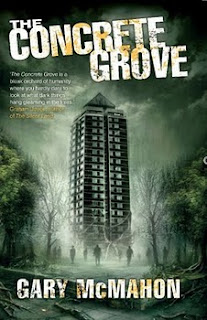 Exactly why Gary McMahon’s profile has managed to avoid my radar until now remains a small mystery, but I imagine the reason is overly simple: a persistent talent has now come more sharply into focus among the mainstream. With a rich and solid publication history in the small press, it was only a matter of time before Gary's longer works gained more mass-market appeal. Whatever the reason, I am glad this initiation has taken place. With The Concrete Grove, Gary McMahon has placed himself at the forefront of innovative dark fiction. Not just for this reviewer personally, but to the greater tribe as a whole.

In the aftermath of a failed marriage resulting in her husband’s suicide, Lana and her fourteen year old daughter Hailey have moved into a large housing estate in a decrepit and crime-addled part of England. Here, poverty reigns king. And so do human beings like Monty Bright, who take advantage of the projects most vulnerable, ruling residents with an iron-clad fist as though the outside world simply does not exist. Drab and soulless, The Concrete Grove is like a physical representation of modern man: a structure reflecting our ultimate failings. When Hailey is rescued by local jogger Tom after a small accident, his introduction into her small family might just be the catalyst needed for hope to return.

But Tom has problems of his own, and his newfound attraction to Lana will not only hamper his efforts to care for his paraplegic wife Helen; it will also be the tipping point that will see him question his own sanity. For The Grove is like a dark amplifier, taking an individuals most potent desires and deforming them. For Hailey, it’s a fascination with the adjacent Needle, a towering and vacant monolith that might just be crux of their mutual foreboding.  Something that could spell either salvation or doom. And for Monty Bright and his lackey’s, it’s like a doorway into a darker realm … one that just needs a little push to open all the way.

One thing that needs to be stated right off the bat: the beautiful way in which Gary handles prose. Regardless of how appealing a reader finds the plot, the syntax in The Concrete Grove is like sublime poetry or dark, elegant music – lines of verse that just screamed to be read out loud because mute they go to waste. At times the dialogue is so sparse as to be non-existent, but I’ve always favored this type of style as a whole. It’s gothic, it’s industrial, and throughout the many scenes neon lights stutter and flicker with the grand maul reckoning of fly-races on an ancient black and white screen.

With many reviews now floating around appraising this desolate excursion, I’ve found it somewhat hard here to accurately describe what makes this novel stand out. If you need optimism in your horror, latch onto something else. But if you’re looking for that species of the genre between antipathy and desire, where the borders between worlds can be narrow, then The Concrete Grove is place you’ll want to visit again and again.