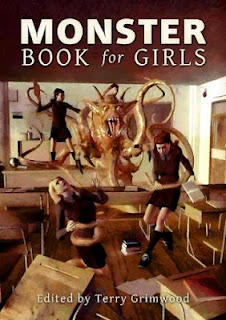 Somewhat familiar with what Exaggerated Press has to offer (Terry Grimwood’s own Bloody War was one of my highlights of 2011), I approached Monster Book for Girls hesitantly (if not curiously). The title itself seemed to raise more questions than answers: was this a collection aimed primarily at certain demographic? Or did the book fit somewhere more in the realm of those campy pre-war throwbacks filled with adventure stories, where characters cavorted across the page with sporty finesse and Hardy Boys exploits?

The answer lies somewhere in between. When the call went out for new poetry and prose inspired by those five words, the guidelines were wide open with no specific genre required. And this certainly is reflective with the end result being a kaleidoscopic mish-mash at turns horrific; at times mundane. And underlying it all the pertinent theme is one of female thaumaturgy: a story book where the battles encompass human monsters; monsters of the imagination, and everything in between.

Highlights include the post-apocalyptic world of Turning by Shay Darrach.  With Sarah’s ‘to-do’ List, Samantha Porter gives us a short and malign comedy with a domestic twist. Stuart Young’s Breaking the Spell is a revenge ditty with YA styling’s that’s droll relief from the tales proceeding it. Getting Warm by Gary McMahon fits at the other end of the spectrum – a delightfully adult story where Gary explores the insights of disparate victims in the aftermath of a true crime.

Rounding off the odyssey is a novelette by another new writer to come along in recent years: Spiral by David Rix. Here, David gives us a poignant personal journey infused with subtle supernatural themes. Like his book Feather, the unique prose outstrips everything else, and we hear the sound of writer who is gaining new momentum.

Imaginative cover illustration and probing title aside, there were times when I found Monster Book for Girls a laborious task, often putting the book down for extended periods. However, the apathy here can be attributed to a distinct lack of horror (something that was spelled out at the very beginning), so there were no overall surprises when encountering fiction that felt cryptic and seemed to go nowhere. More predilections came into effect with the interlaced poetry – although still cleverly adhering to the Monster theme, this is a realm of writing I’ve never found outwardly appealing. Taken as a working whole, however, editor Terry Grimwood has accomplished what he envisioned at the beginning: create an eclectic and intriguing meeting of literary minds and astounding interpretations.